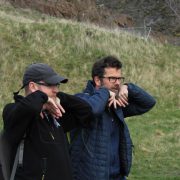 Once more the Edinburgh Geological Society contributed to the annual Science Festival with an unique event in association with the team behind the award-winning Deep Time Walk mobile app.

Over the course of five Deep Time Walks, 76 participants from all over the world, professionals and non-professionals alike, travelled across Earth’s 4.6 billion year timeline at a rate of 500,000 years per step. They were led through time and space (i.e. Holyrood Park) by tour guides Angus & Rob. 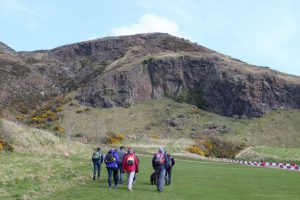 The walk covered significant events in geological and biological history.
Starting with the stellar explosion creating the cloud of material Earth and we are made from; the ‘Big Splash’ impact that led to the formation of the Moon; the Hadean and Archaean eons; LUCA, the ‘Last Universal Common Ancestor’; the beginning of plate tectonics; and the first single-celled organisms. 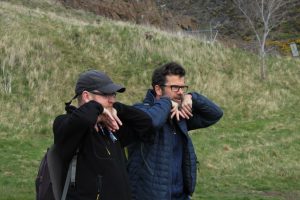 The evolution of photosynthesis and its spreading via horizontal gene transfer was perfectly re-enacted by Rob and Angus, a promising comedy-double-act.

“Life did not take over the globe by combat, but by networking.” 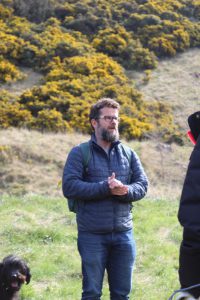 The next big step was the creation of the first eukaryotic cells through symbiogenesis, the “catch and implementation” of other prokaryotes which now make the organelles of the cell. (The above quote is from scientist Lynn Margulis who had a great part in developing the theory.)

For about a billion years not much more happened, which is why this period was also dubbed the “Boring Billion”. And then another form of symbiosis took place… 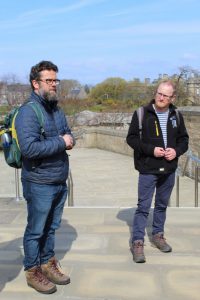 …Lichen, the cooperation between algae and fungus. Presented with the help of Alan AtKisson’s wonderful “The Strangely Popular Lichen Song”.

And so it went on: the first use of calcium for teeth and shells, the development of eyes, the 5-digit limb, dinosaurs, end of dinosaurs, the opening of the Atlantic, and the 1-2 million human beings – not even half of Scotland’s current population – living on Earth just 10,000 years ago; until the walk reached Dynamic Earth again.

It was a fascinating and enlightening experience. To ‘walk the walk’ not only makes the enormous length of time since the creation of the Earth at least a little bit more understandable, it also gave the participants time (!) to appreciate those events which contributed to us and all other life being here today.

It’s possible to create this experience for yourself with the help of the Deep Time Walk app, which you can download for £ 2.99 at deeptimewalk.org.

For all visits to Holyrood Park, please be aware that the Radical Road is still closed due to safety concerns after a rockfall. 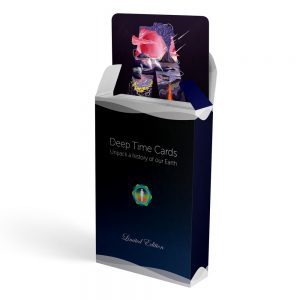 Buy the Deep Time Cards direct from EGS – a set of 58 beautifully illustrated cards, giving 4.6 billion years of Earth history in a tactile, easy to use format. Each card provides a 100-million-year summary of the key transitions that have occurred across Earth’s deep history, with associated reference data and inspiring quotes.