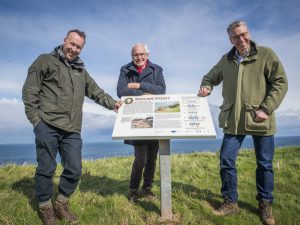 A Scottish Site of Special Scientific Interest of global significance in the history of geology has received a boost from UK oil and gas company Siccar Point Energy. Named after Siccar Point in the Scottish Borders, the oil and gas operator has formed a partnership with Edinburgh Geological Society to back its efforts to improve the visitor experience around the remote site.

Siccar Point is famous as the site where, in 1788, Edinburgh based natural scientist James Hutton found the decisive evidence he sought for his Theory of the Earth – the never-ending cycles of creation and destruction that shape our landscape today. This theory overturned the last vestiges of the Biblical account of a world shaped by the receding waters of a universal flood. Controversial in its day, Hutton’s work is now a foundation stone in the science of geology. Siccar Point Energy has provided funding to replace two interpretation boards and print 20,000 leaflets about Siccar Point and James Hutton. (You can download the leaflets here.)