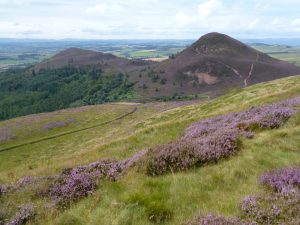 by Alison and Barry Tymon

The rolling hills of the Scottish Borders region stretch from the Berwickshire coast westwards to Dumfries and Galloway, in the north to the Pentland Hills and Edinburgh, with the southern boundary following the border with England. Most of the region is drained in an easterly direction by the 150 km River Tweed and its tributaries.

The solid geology is dominated by Lower Palaeozoic greywackes which form the upland areas to the north and west, such as the Lammermuir Hills, Moorfoot Hills and Ettrick Forest. Eastwards, in the lower Tweed valley, Devonian and Carboniferous sandstones and mudstones are interrupted by volcanic lavas, plugs and intrusions, such as the Eildon Hills, near Melrose. Upland landscapes are influenced by glacial erosion whereas the valleys contain thick sequences of glacial and alluvial deposits.

Though Scotland has been surveyed over several decades for Local Geodiversity Sites (LGS), the Scottish Borders has been a relatively neglected region until recently. There are 28 geological Sites of Special Scientific Interest in the region, which include internationally significant sites such as Siccar Point on the Berwickshire coast and important fossil sites along the Whiteadder Water and the River Tweed. However, the region has many other interesting rock types and landscapes, so further surveying has been undertaken by two enthusiasts over the last three years.

Surveying was assisted by the existence of two informal lists of sites, both derived from work by the British Geological Survey in Scotland, one on greywacke localities and the second on sandstone quarries in the east of the region. Searches of old OS maps available on the National Library of Scotland website turned up many ‘disused quarries’ and these were marked on maps as sites to be explored. Several existing guide books and BGS sheet memoirs were extremely valuable and any references to research papers were followed up. About 250 sites were visited and photographed, some several times, with more than half of those fully surveyed.

Towards the end of the survey period it became clear that there were some exceptional sites, such as well-exposed examples of volcanic rocks or those which showed particularly clear sedimentary or metamorphic features. In the Ordovician and Silurian greywackes, the selection concentrated on sites which showed good examples of ophiolite rocks or turbidite sole structures. The large variety of igneous rocks, some of which are unusual in Scotland, inclined towards an over-emphasis on those which form attractive and prominent hills, although many of these landforms, such as Smailholm Tower, are accessible to the public and therefore have educational value. The Lower Devonian Great Conglomerate underlies a considerable area of the Lammermuir Hills, but was not exploited for building stone or aggregate; finding exposures required considerable searching across high moorland areas, looking for deep gullies in which we might find crags of conglomerate. The Upper Devonian and Carboniferous rocks of the lower Tweed valley are not well-exposed in agricultural areas and many quarries have been infilled or reused, although towns such as Kelso, Coldstream and Peebles display excellent examples of sandstones used for building.

Several sites have links with eminent geologists and are therefore significant localities for the history of geological research. The well-known unconformity in Jedburgh was recorded by James Hutton and his contemporaries, the Eildon Hills and other volcanic landforms were studied by Lady Rachel McRobert, one of the first women to be elected as a Fellow of the Geological Society of London, and Charles Lapworth identified graptolite fossils in several quarries and upland valleys in the Ordovician and Silurian greywackes.

In autumn 2019, 35 potential LGS were submitted to Scottish Borders Council (SBC) for inclusion in the Local Development Plan (LDP) 2020. We were provided with a base map on which we could delineate the boundaries of the LGS using GIS technology. Site forms were completed for each potential LGS and we hope that the designated LGS will appear, with appropriate commentary, in the LDP in 2020.

Exploration of the region will continue, as it is possible that there are other sites with different features or with potential for further research, particularly in such a large and remote area. The good relationship we have with the local authority may enable management of some sites to take place if resources are available, in order to improve the accessibility of LGS which could be used for public enjoyment and learning. For the surveyors, the experience has been most enjoyable and, we hope, will be useful for future geoconservation.

You can find out more about the sites here, including descriptions of 10 accessible sites.