News
You are here: Home1 / News2 / General Information3 / The Rise and Fall of the Dinosaurs 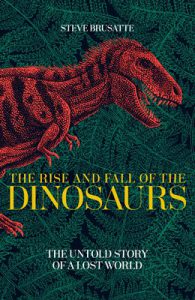 An exciting new book about the dinosaurs is published this month (May 2018). Written by Dr Stephen Brusatte, Reader in Vertebrate Palaeontology at the University of Edinburgh, The Rise and Fall of the Dinosaurs sheds new light on this amazingly successful group of reptiles which flourished for 150 million years. Steve is one of the new generation of fossil hunters, armed with cutting-edge technology, such as CT-scanning, who are working to fill the gaps in the dinosaur story. He follows the dinosaurs from their beginnings in the early Triassic period, through the Jurassic period to their eventual extinction by the end of the Cretaceous period, about 66 million years ago. Along the way he sheds light on some of his own discoveries, such as human-sized tyrannosaurs and feathered raptor dinosaurs entombed in lava in China. EGS members have already enjoyed Steve’s lectures and articles on the dinosaurs, including those that left their footprints in the rocks of Skye. If you’re curious to know more – much more – then this book is an absolute must-have!