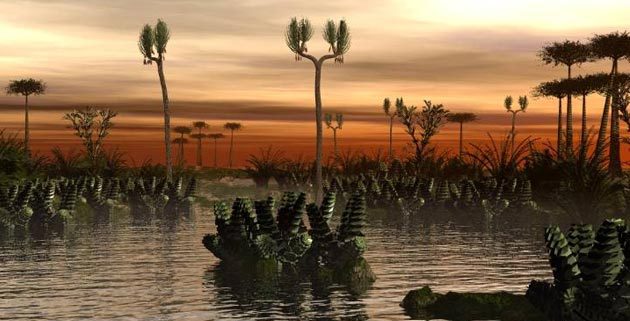 The next lecture of the Edinburgh Geological Society’s winter series will take place on Wednesday 26 October at 7:30pm in the Hutton Lecture Theatre at the Grant Institute of Geology, King’s Buildings, Edinburgh, when Dr Tim Kearsey, BGS Scotland will talk about Palaeosols as evidence of terrestrial climate change at major Palaeozoic vertebrate evolutionary events.
Climate change is a major driver of evolution. Palaeosols (fossil soils) are one of the few direct indicators of terrestrial climate and provide a record of climate changes and landscape architecture, and are critical in understanding the terrestrialization of vertebrates in the Carboniferous and the Earth’s largest mass extinction at the end of the Permian.

Tim Kearsey is a survey geologist and sedimentologist with BGS in Edinburgh. He has research interests in Palaeozoic stratigraphy and sedimentology; palaeosols and palaeo-environmental reconstruction; and geostatistics. In June 2015 he was joint leader (with David Millward) of the highly successful EGS excursion to Burnmouth.

The meeting will be followed by tea and biscuits in the Cockburn Museum of the Grant Institute, to which all are invited.

Power of Our Planet