You are here: Home / Lectures

Our Lectures are held on alternate Wednesday evenings during the winter. These are free and aimed at anyone with an interest in Earth science. Afterwards, you can join the speaker and members of the Society for a cup of tea and a chat.

Our varied programme of illustrated evening lectures runs from October to Easter, usually on Wednesday evenings.

They are open to the public free of charge, and visitors are welcome. The lectures usually take place in the Hutton Lecture Theatre in the Grant Institute of Geology, The King’s Buildings, James Hutton Road, Edinburgh EH9 3FE. Tea and biscuits, also at no charge, are served following the lecture in the Cockburn Museum of the Grant Institute.

Speakers and topics are carefully chosen to provide interest for both the amateur and professional geologist. These meetings also provide an informal opportunity to chat to other members, and find out more about geological sites from local experts. Each year, a celebrity lecture is given by a geologist of international repute, who is invited jointly by the Society and the Geological Society of Glasgow.  At the annual Fellows’ Night, members give accounts of their own geological interests, specimens or travels.

The lectures will be on every second Wednesday, starting on 16th October, restarting after the Christmas break on Wednesday 8th January 2020.

Information about the lectures, including more detailed abstracts where provided, are available below.

Please note trial of new start time for lectures this session. All lectures will commence at 7pm. 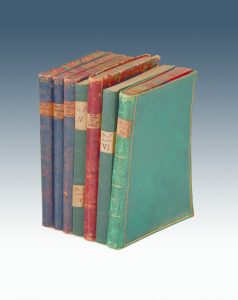 Sir Charles Lyell: Making the archives of a public man of science public

From popularising previous geological theories, advancing as well as adapting to new ideas, Charles Lyell was for forty five years one of the great public figures of Victorian science. Through his many books, writings and lectures he reached and influenced a broad and diverse audience. Following a survey of Lyell’s success in public engagement, David McClay of the University of Edinburgh will explore and discuss how Lyell’s extensive archives and collections are, inspired by Lyell himself, going to become fully publically accessible and used in the future.

The Secret Life of Carbon 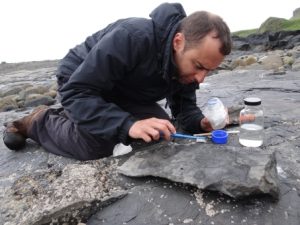 The Jurassic Hebrides: New Dinosaur Discoveries from the PalAlba Group

Over the past six years, palaeontologists from Scotland have worked together as the PalAlba group, to discover, study, conserve, and publicise fossil vertebrates. Our focus has been on Middle Jurassic faunas of the Inner Hebrides, particularly the Isle of Skye. In this talk I will review our most interesting discoveries, including several new dinosaur tracksites, and introduce our newest finds, including a new pterosaur (flying reptile) from Skye and tracks and bones from the Eigg and Muck. Together, these discoveries reveal an ecosystem of dinosaurs and many other species, living on a subtropical island ca. 170 million years ago.

Dating the source of the Nile

Cenozoic rifting in East Africa profoundly altered the regional topography. The surface-warping of an ancient Gondwanan landscape formed vast lakes and redirected the former headwaters of the Congo River into the Nile. These landscape events influenced the evolution of hominins and show us that river networks can respond in surprising and dynamic ways to continental rifting. This talk will discuss how modern cosmogenic isotope dating methods are answering old questions about the chronology of catchment capture and river reversal at the source of the Nile. 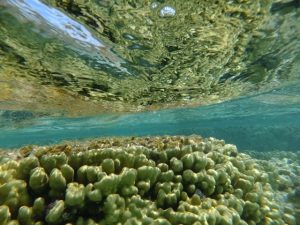 Coral reefs are sensitive recorders of past sea-level, climatic and environmental changes. They form archives that may be used to understand the long-term behavior of the tropical ocean/atmosphere system in response to anthropogenic and natural forcing. Coral reef records of the last deglaciation (i.e. the last 23,000 years) and of the Last Interglacial (i.e. about 125 kyrs ago) are of special interest as these periods are generally seen as potential analogues of climatic and environmental changes that our Planet may face in the future in the context of global warming.

Dr Gilbert Camoin is Senior Research Scientist at the CNRS-CEREGE, Aix-en-Provence, France. His major scientific interests concern the reconstruction of sea-level and environmental/climatic changes based on reef and carbonate platform records, as well as the analysis of the impact of such changes on carbonate systems. Since 2012 he is managing ECORD (European Consortium for Ocean Research Drilling), the European participation to the International Ocean Discovery Program.

This meeting, close to the anniversary of the foundation of the Society, is a chance to meet other members informally, with refreshments served from 6.30pm, followed by a series of short talks given by members. The event will be held in the upper level of the Lyell Centre, Heriot Watt campus (Research Ave S, Edinburgh EH14 4AP) and booking is not required. We are very grateful to BGS Scotland for hosting this event. If you would like to give a short talk on a subject of interest to members, please email Chris Lofthouse on fellowsnight@edinburghgeolsoc.org.

The Neoproterozoic Argyll Group (Dalradian Supergroup), is a well-exposed, 10km thick, sequence recording a transition from glacial through shallow marine to slope and deep-water sediments and pillow lavas. It probably represents the rift-to-drift sequence of the Laurentide margin of Iapetus. Two units are presented: the Port Askaig Formation, probably the Sturtian phase of “Snowball Earth”, and the Jura “Quartzite”, a 5km thick cross-bedded, sandstone. These allow general points to be made about “Snowball Earth” and preservation bias in the sedimentary record respectively.

For three summers between 2014 and 2016, field geologists worked alongside professional climbers and botanists to undertake a new survey of the geology and Alpine flora found on the North Face of Ben Nevis, Britain’s highest mountain. The survey was co-ordinated by the Nevis Landscape Partnership, a charitable trust established in 2003 to help guide and manage opportunities for visitor enjoyment and appreciation of the wider Nevis area. Data on the geology and botany was gathered on iPhones using a digital compass clinometer FieldMove Clino, and the data was then transferred to the software application Move for further analysis and model building.

In 2015, geological field mapping was extended to include the whole of the late Caledonian Ben Nevis Igneous Complex (~430 Ma) and the late Precambrian Dalradian metasedimentary country rocks. The results of the new field mapping and 3D model building have provided important insights into the geometry, emplacement and preservation of the plutonic and volcanic rocks in this classic area of world renowned geology.

Structural data indicate that the plutonic rocks forming the Ben Nevis Igneous Complex have a laccolithic (blister like) form with a gently domed roof and was fed by magma rising up steep-sided NE-SW trending fissures in the core of the Appin Syncline. The summit region of Ben Nevis consists of late Silurian to Early Devonian age volcanic rocks originally interpreted as a thick sequence (>600m) of andesite lavas and agglomerates that were down-faulted during caldera subsidence. New field mapping has revealed that the volcanic rocks consist largely of volcaniclastic debris flows, and extensive block and ash flow deposits with minor air-fall tuff units. There is no evidence of any andesite lava flows or a volcanic vent. The volcanic detritus was derived from a volcanic centre situated to the NW of Ben Nevis, perhaps several tens of kilometres away. The rocks forming the summit region of the mountain have been re-interpreted as a large roof pendant or keel of the former late Silurian to Early Devonian volcanic land surface that once covered much of the SW Highlands of Scotland. Without the granites of the Ben Nevis Igneous Complex surrounding and protecting the volcanic rocks from recent glacial erosion, there would have been no evidence for the remnant landscape now preserved at the summit of the highest mountain in Britain.

Mineral exploration beyond Earth will go through a ‘tour’ of extra-terrestrial mineralogy, most of which we know about through reflectance spectroscopy – a technique that is used quite widely in the mining industry. The talk will mostly focus on Mars, but also icy bodies in the outer solar system. There are also quite a few parallels between mineral exploration on Earth (for mining) and mineral exploration in space (for discovery-driven science), e.g. challenging terrains, the need for miniaturised technology, technology that can operate in temperature extremes/dusty environments etc.

James Clerk Maxwell’s equations of electromagnetism underpin my research. Using them, we can model magnetic fields, arising from the crust (e.g. oceanic magnetic stripes) and core (making your compass needle point approximately North), and probe the electrical properties of rocks. I’ll present results on the magnetic fields of Earth and Mars and discuss their  implications, and show how electrical properties have been useful in inter-disciplinary studies, especially in the East African rift. 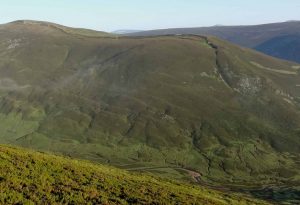 Top of the Battery Rock Slope Failure, Glen Ey, Braemar. The crest is split for a kilometre. Photo: David Jarman.

Burning planet: the story of fire through time

This joint lecture will take place in the Lecture Theatre, Gregory Building at the University of Glasgow. EGS members are warmly invited to attend.
Further information at gsocg.org/events/category/lectures/

The geological controversies of the Falklands Plateau

Despite the Falklands Plateau’s significance as a crustal structure, our knowledge of the plateau is severely limited. Many of the findings from geological and geophysical studies are widely debated. This discussion will provide an overview of the main controversies including: the role of the plateau in the break-up of Gondwana; its crustal composition; and whether it is home to one of the largest impact craters on the planet.

This thread seems like a good point to launch the Scottish Geology Trust on twitter @scottishgeology - a new charity that we hope will get the whole geo community in Scotland working together to start solving issues like the low level of geology teaching. https://t.co/IHzAMJl5Rc

A new paper published in the Scottish Journal of Geology by @adrian_hartley et al. shows a new record of ice-rafting in 1 billion year #palaeovalleys from the Highlands of NW Scotland…read free for a limited time https://t.co/rsxCXOMQfx

Happy New Year! In February and March, join me for the great Firth of Forth Geowalk from St Abbs to St Andrews. 20 days - 230 km - 450 million years. Raising money for charity and celebrating Scotland's geology #YCW2020 https://t.co/gAFB79Hk5g