Welcome to the Edinburgh Geological Society

The Edinburgh Geological Society was founded in 1834 with the aim of stimulating public interest in geology and the advancement of geological knowledge. We organise a full and varied programme of excursions and lectures that bring together everyone from complete beginners to professional geologists interested in exploring the geology of Scotland and beyond.

Membership of the Society is open to all with an interest in geology and who share the aims of the Society. Most people join as Ordinary Fellows, but there are special rates for family members, seniors and junior associates. Join the Society.

The Edinburgh Geological Society is one of the UK’s largest and oldest geological societies, with a membership of over 600 people: professional geologists, amateurs and members of the public with an interest in geology, mainly from Scotland but also from around the world. The Society was founded in 1834 with the aim ‘to encourage public interest in geology and the advancement of geological knowledge’, an aim we still adhere to today. The Laws of the Society drawn up at that time set the framework for the Society’s activities, though they have since been modified many times to reflect changing times. The Society’s Archive, held in the Centre for Research Collections of the Library of the University of Edinburgh, records our long history. With close links to the British Geological Survey in Edinburgh, the University of Edinburgh’s School of GeoSciences, and the National Museums of Scotland, the Society beneﬁts greatly from having many professional geologists among its members.

The Society’s ‘year’ runs from October to September. At the core of the Society’s activities for members are the winter lectures and the summer field excursions. 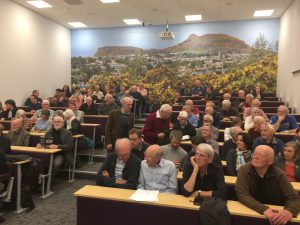 Lectures are given – fortnightly on Wednesday evenings – from October through to March. These are usually held in the Grant Institute, on the King’s Buildings campus of University of Edinburgh on West Mains Road. Members receive details of the lecture programme in our autumn Newsletter, distributed in September. Lectures are generally aimed at the informed amateur, and range across a wide variety of subjects, covering geological research and theory world-wide, as well as key areas of Scottish geology. Our Fellows’ Night is a social evening, usually in early December, when any member can give a short talk or display on a geological topic. This is where we discover the talent among us! 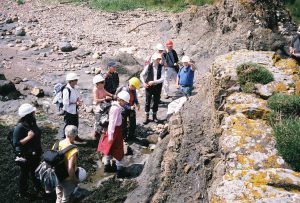 From April to September we arrange field excursions so that members can get a feel for the rocks and the geological structure of Scotland (and sometimes further afield): ‘the best geologist is the one who has seen most rocks’. The programme of excursions is published in our Newsletter in early spring. There are six to eight full-day Saturday excursions by coach or public transport from Edinburgh, and shorter evening excursions, on Wednesday evenings, at sites close to or within the city.

Further afield, there is one weekend excursion and one full week’s excursion every year. These are often in Scotland, where we feel that the Society has a special role to play, but in the past have included trips to Norway, Ireland, England and Wales.

The Newsletter is distributed by post twice a year, giving details of forthcoming lectures and excursions, and news of the Society and geological events organised by other organisations. Any member can submit items for the Newsletter. Contact details for key ofﬁcers of the Society are included.

This website has full information about the Society, our activities and publications. Keep an eye on it for updates as the year goes by. We also have a Facebook page. The EGS News email list is used to circulate news and last-minute changes, for example if a lecture is changed or cancelled. All members are invited to join this list: just ask the Membership Secretary.

The Edinburgh Geologist is the Society’s magazine, published twice a year, and it provides a revealing view of the various interests of the Society’s members. The Annual Report, incorporating the Proceedings of the Society, is distributed in advance of our Annual General Meeting, normally held in early spring.

The Society publishes a number of excursion guides to the geology of different areas of Scotland, which guide readers to the most important rock exposures in any area and explain their signiﬁcance. The guides are available to members at a 20% discount.

The Scottish Journal of Geology is our scientific journal, of international standing, edited jointly through the Edinburgh and the Glasgow Geological Societies. Published twice yearly, it is sent to all Ordinary members.

The Society’s income comes from the subscriptions of our members, from sales of our publications, and from investment income from ﬁnancial reserves built up over the years. All our ofﬁce bearers are volunteers working on an honorary basis. The costs of most Society activities are met from within the Society’s funds. However, members attending excursions contribute towards costs.

The Society makes grants and awards in three categories:

All EGS members are entitled to free access and full use of the University of Edinburgh Library. In the past, the Society has purchased geological texts which are interfiled with the main Library earth science sequence in the Noreen and Kenneth Murray Library in the King’s Buildings campus. All EGS-owned books can be identified from the pink dot that is placed on the spine and the EGS bookplate inside the front cover of the book.

Local Geodiversity Sites (previously known as RIGS) have been designated throughout the UK for special protection because of their importance to the development of geological knowledge. The Society hosts Geoconservation groups which play a key role in the conservation and interpretation of a number of Local Geodiversity Sites across east Scotland. Society members are involved in site conservation and the publication of descriptive leaﬂets for the public, and also in proposing possible new sites for designation.

Governance of the Society

The Society is a registered charity whose affairs are looked after by a Council composed of Ofﬁce-Bearers and Ordinary Members. Its composition is stipulated in the Laws of the Society. Members of Council are elected at the Annual General Meeting of the Society each January, and any full member of the Society can stand for election. The Council’s work is carried on through a number of subcommittees: