You are here: Home1 / Grants and Awards2 / Fieldwork Grants – Reports

Fieldwork Grants from the Clough and Mykura Funds

Grants from these funds are available to support geological field work at home or abroad. 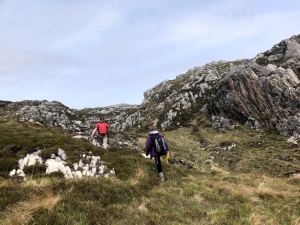 The funding granted by the Edinburgh Geological Society through the Mykura Fund was used for field work as part of the above MSc dissertation project. The project set out to perform the first Si isotope measurements on lithologies from the Lewisian complex in NW Scotland. The aim was to establish whether there are observable differences between different lithologies and how the results from the Lewisian would compare with recently published data from other Archaean rock suites. While localities from both the Northern and Central Region of the Lewisian were targeted, a focus was put on Central Region localities interpreted as metasedimentary in the literature, because Si isotopes fractionate most in low temperature processes.

Field work was successfully carried out during the week commencing the 31st of April 2021. In total, 31 samples were collected from nine localities. Of this sample set, 11 samples were selected for analysis: a TTG gneiss, two pairs of mafic gneiss and adjacent brown gneiss, three further brown gneisses, two “green gneisses” (kyanite bearing, white mica-dominated) and an alleged meta-arkose. The samples were analysed for their Si isotope composition in the STAiG laboratories at the School of Earth & Environmental Sciences of the University of St Andrews.

Without the Mykura funding, field work might not have been possible, so we express our deepest thanks to the Edinburgh Geological Society for the awarded grant. For Kerstin it was of great motivation to have been able to collect samples herself, know the geological context, and therefore truly take ownership of the project, rather than simply get given some bags of rock powder. Kerstin presented the results in a first class MSc dissertation, and we plan to publish the data – either stand-alone or as part of a more widely-aimed study of Si isotopes in Archaean terrains. 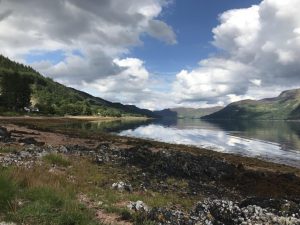 After a summer spent in lockdown due to the COVID-19 pandemic, in late August 2020 I was able to undertake my long-awaited final field session at the Ratagain Complex in the NW Scottish Highlands with support from the Edinburgh Geological Society.

As a disabled PhD student with Asperger’s syndrome (an autism spectrum disorder) I rely on my parent carers to help me manage my everyday life. The grant awarded to me by the Edinburgh Geological Society enabled both myself and my parent carers to complete my detailed sampling of the Ratagain Complex and bring the total haul for the project up to the milestone figure of 100 block samples.

Future work will include detailed geochemical and structural analysis of the 100 samples that I have gathered across four field sessions at Ratagain. The geochemical methods used will be X-Ray Fluorescence (XRF) spectrometry and Inductively coupled plasma mass spectrometry (ICP-MS), whilst the structural studies will involve the anisotropy of magnetic susceptibility (AMS) and thermomagnetic analysis, both of which are powerful indirect tools used to study intrusive rocks like granites that often lack visible fabrics.

Report (pdf file, 3.77 MB) from a group of five undergraduate Geologists from the University of St Andrews who undertook a six-week geological mapping expedition to the island of Tuttutooq, south-west Greenland, during the summer of 2019. 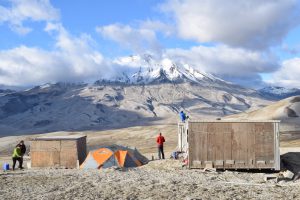 Figure 1 – Our campsite in the Valley of Ten Thousand Smokes, looking towards Mount Griggs, Bob Gooday.

2017 Mount Katmai and the Valley of Ten Thousand Smokes

In June 2017, support from the Edinburgh Geological Society allowed me to participate in the International Volcanological Summer School in Katmai National Park, Alaska. This involved staying in the Valley of Ten Thousand Smokes for ten days, looking at volcanic features in the Valley and the surrounding Katmai Cluster of volcanoes. The Katmai-Novarupta eruption in 1912 was the largest on Earth in the twentieth century, and completely filled a nearby valley with pyroclastic deposits. These deposits sustained intense fumarolic activity for several years, giving the valley its name.

During our stay in the Valley, we looked at the pyroclastic deposits and landforms created by the 1912 eruption, which have been largely untouched by erosion or vegetation. The highlight of the trip was climbing to the rim of the crater at the top of Mount Katmai. The eruption itself happened at Novarupta, 10 km to the west, but the emptying of the magma chamber below Katmai caused the mountain to collapse, forming a caldera 4 km across.

Observation of this caldera, and discussion of the processes at work in the accompanying eruption, have helped me with my PhD work on a similar-sized, but much older, caldera system on Arran, western Scotland.

Download a more detailed article written by Bob about this project.

Figure 2 – The caldera at the summit of Mount Katmai, formed during the 1912 eruption. Bob Gooday. 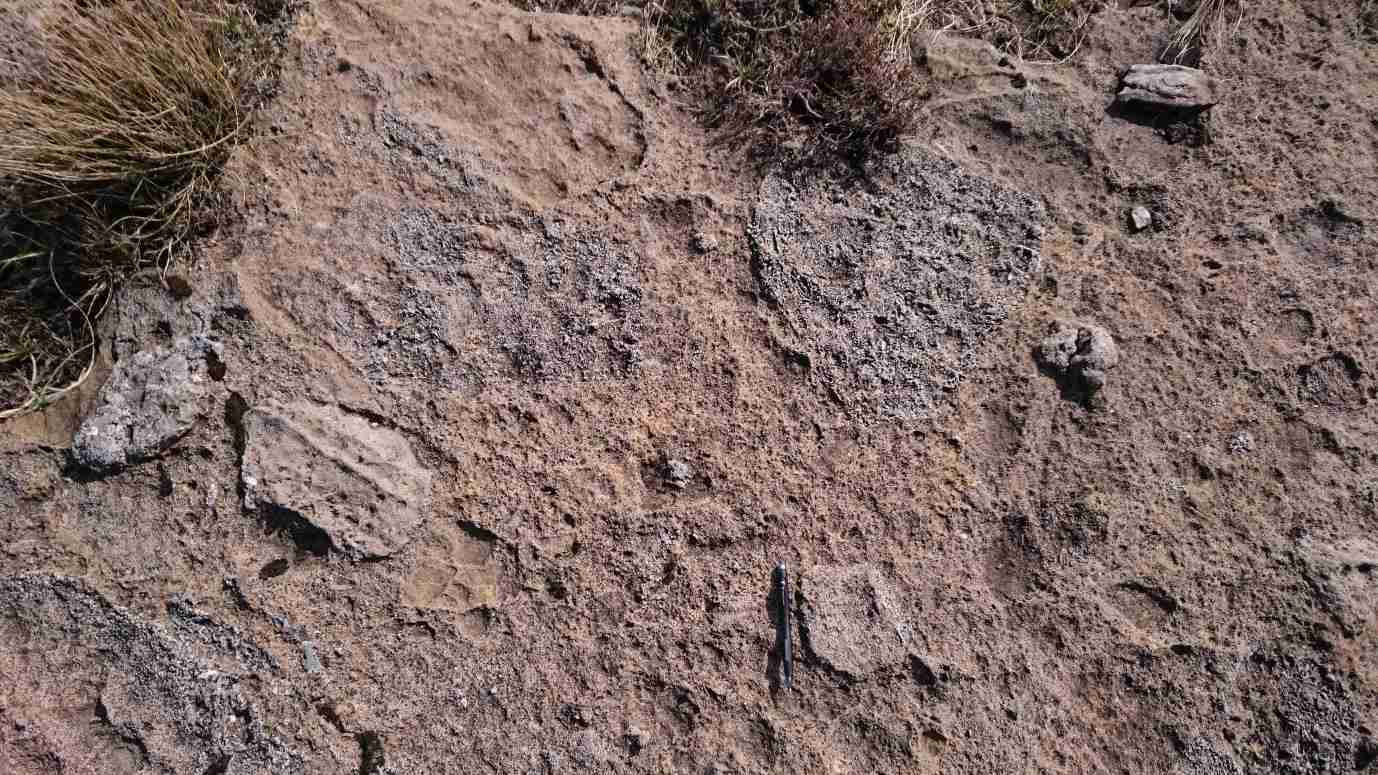 With the support of the Edinburgh Geological Society I was able to spend some time in addition to my planned field season exploring the Central Layered Intrusion (CLI) as part of the Rum Layered Suite in NW Scotland.

The CLI is perhaps the most poorly studied of the Rum Layered Suite, and the most lithologically complex, being composed of juxtaposed cumulate rocks such as peridotite (including harrisite), troctolite, and gabbro without pervasive layering (see image above). The CLI occurs closest to the Long Loch Fault in the centre of the intrusion, the presumed source of the Rum magmas which was purportedly active during the formation of the layered complex. As such, brecciation and deformation is widespread with metre sized blocks of foreign cumulate found incorporated within peridotites and troctolites. The purpose of additional study as part of my current PhD project was to investigate the occurrence of Cr-spinel seams within the CLI, which was actively deforming during its formation. 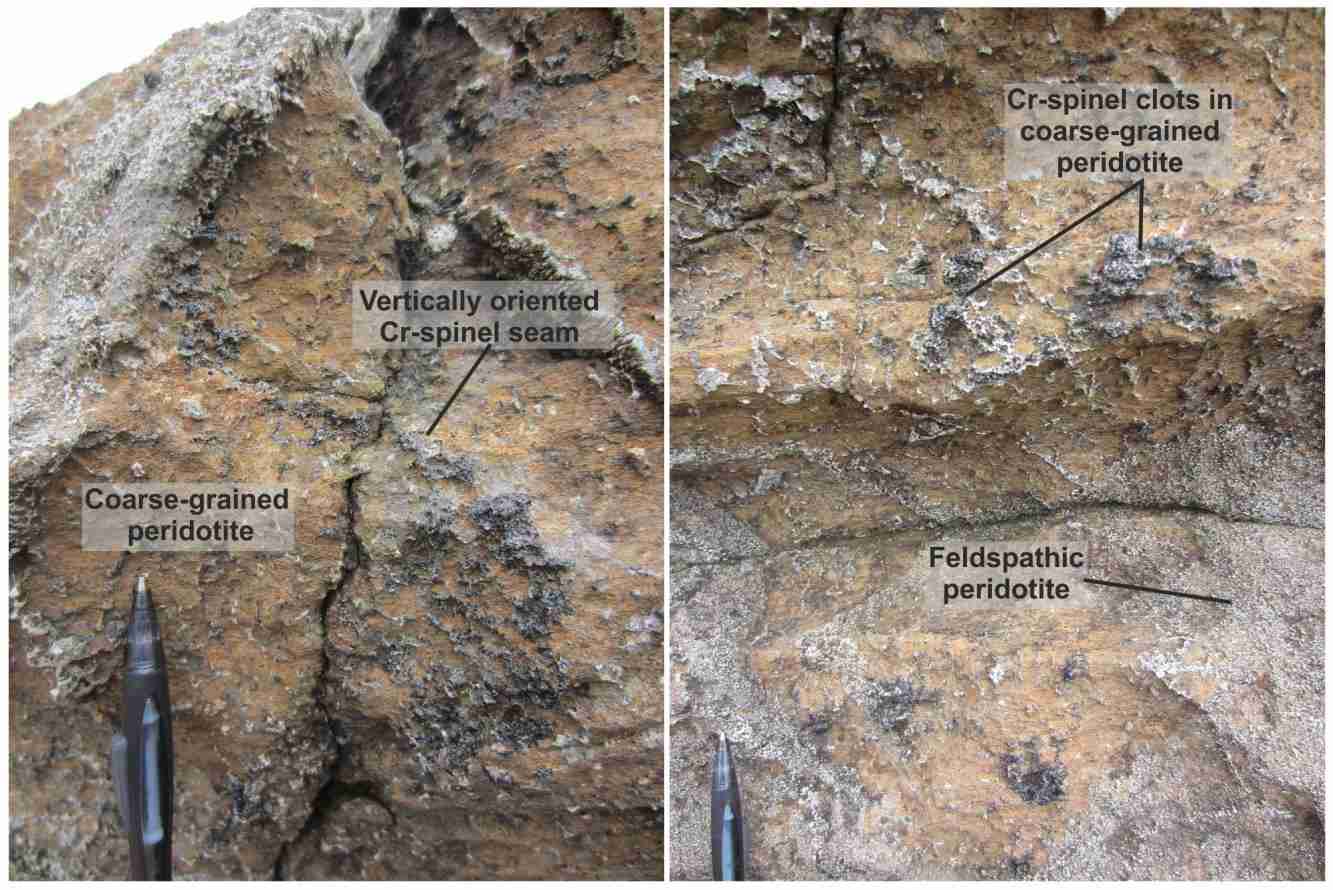 Results of sampling and field investigation during 2015 will be incorporated into my current study to provide an intriguing parallel to well-layered peridotite cumulates and investigate the effects of magmatic deformation on the petrogenesis of Cr-spinel seams an associated platinum concentration in the Rum Layered Intrusion.

Across the Ethiopian rift there are a series of young silicic volcanic complexes, many show evidence for having undergone significant caldera forming eruptions in the recent past and several show clear signals of ongoing unrest (such as ground deformation). Our knowledge of the typical size and reoccurrence interval of explosive eruptions from these volcanoes is extremely limited, and as a result the hazard posed to the several million people that live in close proximity to these volcanoes is poorly constrained.
To bridge our current knowledge gap on the explosive activity of these volcanoes we are carrying out a geological mapping project of Aluto (Fig.1), a typical rift volcano that has a significant population living both on and within the vicinity of the complex, and is also the target for major geothermal development. In particular, we are studying the distribution of tephra (the explosive volcanic deposits of ash and pumice) to assess the physical parameters of these eruptions (e.g. mass and volume of erupted material, as well as the spatial patterns of dispersal).

This fieldwork focussed on logging sequences of tephra exposed in a deep gorge cut by the Bulbulla River 5km west of Aluto volcano. These outcrops expose up to 50m thick sequences of fluvial, lacustrine and terrestrial sediments with interbedded tephra horizons. In the field we found evidence for 5-10 primary tephra horizons preserved in the last 20’000 years of stratigraphy. Future work will involve geochemical analysis of the pumice to chemically fingerprint eruptive units (and confirm whether or not they are derived from Aluto), and additionally, carbon dating of shells and charcoal to define time brackets for these eruptive events. Stratigraphic correlation of these tephra horizons will ultimately allow a step-change in our understanding of the explosive eruptive history of the volcano with which future hazard scenarios can be assessed.

Paper resulting from this field work – “Structural controls on fluid pathways in an active rift system: A case study of the Aluto volcanic complex”