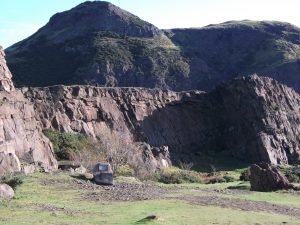 We’ve arranged an informal replacement for the mapping exercise in Holyrood Park that was planned for September but which had to be cancelled at short notice. We hope to run another full excursion in the spring: this informal, shorter excursion is planned as a basic introduction to mapping that will complement any future plans.

Holyrood Park offers a superb section through varied geology, including the eroded cone of the Arthur’s Seat volcano, a major dolerite intrusion that forms Salisbury Crags, and exposures of sandstone and other sedimentary rocks formed early in the Carboniferous Period. This excursion will introduce the main features of the geology but encourage deeper understanding by learning how to create a geological map of a small area. Participants will learn the basics of making measurements in the field using a compass-clinometer, analysing rock exposures and recording information in a field notebook and paper map.

Further details and how to book …