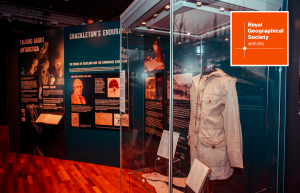 One of the greatest ever photographic records of human survival on display in a remarkable new exhibition created by the Royal Geographical Society, curated by polar historian Meredith Hooper. The touring version of Enduring Eye is at the National Library of Scotland until 12 November 2017 and, alongside Hurley’s astonishing images, it showcases the expedition’s links to the people of Edinburgh.

One of these is a tartan blanket given to the expedition’s Scottish geologist James Wordie by his sister. After the ship sank, it was adapted into a jacket to help give some protection against the fierce polar winter. Also on show is a paperknife crafted from a wooden tent peg and given to Wordie by fellow Scot Henry McNish, the ship’s carpenter whose skills were essential in getting the men to safety.

Please support the Mary Anning statue fundraising appeal! They only need to raise the final £30,000 of the £100k needed to complete Mary’s statue, along the Jurassic Coast at Lyme Regis.
https://t.co/csI0XP0oxP