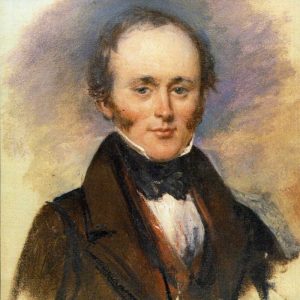 Painting by Alexander Craig during the British Association meeting in Glasgow in 1840 when Lyell was 43 years old.

In 1871 the Edinburgh Geological Society won the prestigious support of Sir Charles Lyell when he agreed to succeed Murchison as the Society’s Patron. Arguably the foremost geologist of the nineteenth century, Lyell was known chiefly for his influential book, the three-volume Principles of Geology. His choice of subtitle, An attempt to explain the former changes of the Earth’s surface by reference to causes now in operation, summarised his conviction that the geological past could be explained by exactly the same natural processes as we see today, operating at similar rates but for immensely long periods. This concept had originated earlier with James Hutton and from 1832 was known as uniformitarianism. It posed a challenge to catastrophism, the idea prevalent in Lyell’s day that landscape features, such as volcanoes, were the result of sudden and violent events rather than prolonged and gradual build-up.

Charles Lyell was born in 1797 at Kinnordy House in Forfarshire (now Angus) into a wealthy family. He grew up in the New Forest in Hampshire where, encouraged by his father, he developed a keen interest in natural history. In 1816, Charles went to Oxford University to study classics but also attended geology lectures by William Buckland. After graduation in 1819 he went on to train as a lawyer. However geology still fascinated him and, while travelling in southern England and France, he met established geologists and studied rocks in the field. In 1824 Lyell read his first paper to the Geological Society of London, claiming that modern lake sediments near Kinnordy were similar to the Tertiary freshwater limestones of the Paris Basin. This paper heralded the principle that underlay all his subsequent work: he later expressed it as “The present is the key to the past”. 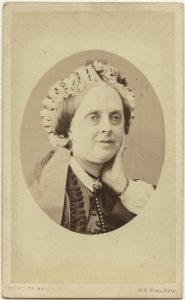 In 1827 Lyell abandoned the law in favour of geology. He even married a geologist: Mary Horner, the well-educated daughter of Leonard Horner (who founded Heriot-Watt University). Their honeymoon in 1832 was a geological tour of Switzerland and Italy. The year before, Charles had been made the first Professor of Geology at King’s College, London, but he resigned in 1833 in the face of criticism that his lectures contradicted Biblical chronology. Besides, his three Principles of Geology volumes, published 1830 to 1833, were selling very well. He continually revised Principles throughout his life, for he was widely travelled and, wherever he went, he gathered new material to hone his geological ideas. His observations were recorded in 294 notebooks which, in 2019, were “saved for the nation” by a fund-raising campaign to which the EGS was pleased to contribute. The notebooks are now in the Centre for Research Collections, University of Edinburgh Library.

The young Charles Darwin took Principles with him on the voyage of HMS Beagle and found it so revelatory that he became Lyell’s disciple – and friend. Lyell later helped Darwin publish his book On the Origin of Species (1859), despite his initial reluctance to accept the idea of evolution by natural selection.

By the time Lyell became EGS Patron he had been knighted (in 1848) and made a Baronet (in 1864). He had found fame as a lecturer and as an author: as well as Principles of Geology (which ran to 12 editions), he wrote four geological travel books about North America; a field guide called Elements of Geology; and a book about the age of the human species. Besides putting geology on a sound scientific footing and stressing the role of “deep time” in Earth history, Lyell coined the stratigraphical terms Eocene, Miocene, Pliocene, Pleistocene and Recent as well as Palaeozoic, Mesozoic and Cenozoic. He had influential explanations for earthquakes, volcanoes and even climate change. But he was mistaken in thinking that glacial erratics could have been transported by icebergs and that loess was a flood deposit.

Lady Lyell died in 1873 and Sir Charles Lyell in 1875; he is buried at Westminster Abbey. His name lives on in Mount Lyell in Yosemite National Park. California; Lyell craters on the Moon and Mars; the Lyell Centre at Heriot-Watt University; and the jawless fossil fish, Cephalaspis lyelli.