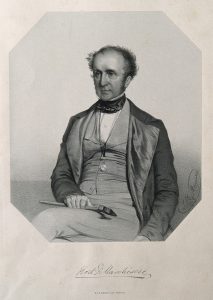 Roderick Impey Murchison, the “King of Siluria”, was born at Tarradale House, Muir of Ord into a wealthy family and educated at Durham School and the Royal Military College. After army service in the Peninsular War, retiring as Captain, he married and settled down in England to a life of fox-hunting. However his wife, Charlotte Hugonin, who was a geologist, persuaded him, as did the chemist Sir Humphry Davy, to take up science instead. So in 1824 the Murchisons moved to London where Roderick attended lectures in geology and chemistry at the Royal Institution and joined the Geological Society of London. The following year he read his first paper to the Geological Society and by 1831 he was its President. He carried out extensive fieldwork, often with the able assistance of his wife, in England, Scotland, continental Europe and Russia, publishing the results in over 180 papers and three books. He rose to become, in 1855, the Director-General of the British Geological Survey and received many honours, including being knighted in 1846 and being made a baronet in 1866. When the Edinburgh Geological Society elected him as their first Patron in 1863, they acquired a highly influential ally at a time when the Society was recovering from a period of decline.

Murchison is remembered particularly for establishing the Silurian system of rocks in his key fieldwork area of South Wales and the Welsh Borderland. His friend, Adam Sedgwick, working in North Wales, established the Cambrian system. Unfortunately they fell into dispute over the boundary between the Cambrian and the Silurian, a disagreement that was finally settled by Charles Lapworth when he proposed a totally new intervening system, the Ordovician. Murchison was also involved in establishing the Devonian and Permian systems, the latter as a result of his explorations in Russia.

In his final years the disputatious Murchison became embroiled in the bitter controversy over the structure of the North-West Highlands of Scotland. He maintained that the rock sequence there was an undisturbed one, younging from west to east and capped by his beloved Silurian. His opponent, Professor James Nicol, instead interpreted Murchison’s “Silurian” as being much older rocks emplaced by earth movements on top of younger ones. It was not until Murchison’s disciple, Archibald Geikie, became Director-General of the Survey in 1882 and sent his best surveyors to the area that the controversy was finally settled in favour of the complicated system of thrusts that we know today. (Geikie was also the first Regius Professor of Geology at the University of Edinburgh, a position that was endowed by his mentor, Murchison, on condition that he nominate the post-holder.)

There are at least fifteen places on Earth, and a crater on the Moon, named after Murchison. One is Murchison House at The King’s Buildings, Edinburgh: it was the headquarters of the British Geological Survey in Scotland until it relocated to The Lyell Centre in 2016.

For an account of the North-West Highlands controversy, see the EGS publication Assynt – The geologists’ Mecca.