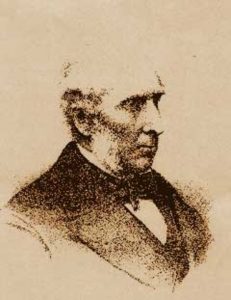 David Milne-Home (D M-H), Scottish advocate, landowner, geologist and meteorologist, was President of the Edinburgh Geological Society from 1874-89.  His service for 15 years continuously makes him our longest serving President (No.15 on our list).  He was also a Vice-President from 1871, when Professor Archibald Geikie FRS was our President.  By way of comparison, our second longest serving President for 11 years was Alexander Rose FRSE, one of the founders.

David Milne (D M as he was born) was educated at both school and university in Edinburgh, before following on into the law profession in 1826.  Among his friends at university was John Forbes, later Sir John Forbes of Fettercairn and his brother James, later Professor of Natural Philosophy at the University of Edinburgh and Principal of United College, University of St Andrews between 1859 and 1868.

In 1829, D M became engaged to Jean Forman Home of Paxton in Berwickshire and they married in July 1832.

D M’s first geological paper (1837) was on the geology of Berwickshire and then in 1840 by one on the Mid-Lothian and East Lothian coalfields.  In 1847, he published on the parallel roads of Glen Roy, believing their origin was due to lake levels and not raised beaches as proposed by Charles Darwin, with whom he had corresponded. 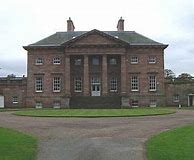 In 1852, when his wife inherited various properties – Wedderburn, Billie and Paxton, they took the name of Milne-Home (D M-H).  Paxton House in the Borders is owned by a private charity now and is accessible under the National Trust for Scotland joint access scheme. It is under the name D M-H that his work on meteorology and seismology are referenced.

In 1839 a series of earthquakes were observed centred around the Perthshire village of Comrie (sometimes referred to as “Shaky Toon”).  This led to setting up of a Special Committee of the British Association for the Advancement of Science (now the British Science Association), the purpose of the committee being to obtain “instruments and registers to record shocks in Great Britain”.  An early attempt by D M-H’s friend, Prof James Forbes (University of Edinburgh) was made to design a machine for recording earthquakes.  D M-H wrote in 1841 about Forbes’ invention as “the worst machine that ever there was”. It was D M-H who coined the term “seismometer” to describe these instruments (from the Greek σεισμός, seismós, a shaking or quake, from the verb σείω, seíō, to shake; and μέτρον, métron, to measure – wikipedia.org/wiki/Seismometer).  He also collected information from eye-witnesses and written reports of various earthquakes, which he published in “Notices of Earthquake-shocks felt in Great Britain, and especially in Scotland, with inferences suggested by these notices as to the causes of these shocks” in the Edinburgh New Philosophical Journal, July 1841. The most significant instrument resulting from the BA committee’s work was the inverted-pendulum “seismometer”, also designed by James Forbes in 1844.

After 1844 the earthquakes seemed to decline around Comrie, but an upturn in activity in 1869 led to new and more sensitive instruments, and the building of the Earthquake House in 1874.  A further revamp took place in 1988, when the BGS supplied and fitted modern equipment there. 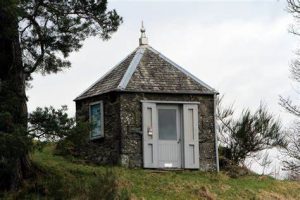 In 1877, D M-H proposed the setting up of meteorological station in the summit of Ben Nevis and for which he led an appeal to raise funds and the station was duly opened on the 17th October 1883.

Around 1871, D M-H published a book on the Forth Estuary, and he also took part in the Boulder Committee for a further 12 years from 1872 to 1883 (at the same time as serving the Society as both our Vice-President and President).

In his Berwickshire life, D M-H’s fundraising was not restricted to science, as demonstrated by his efforts to raise funds for the widows and orphans of the Eyemouth fishing disaster which affected the village in October 1881.

His wife died in 1876 and he himself suffered a debilitating head injury in 1885 from which he never fully recovered.  He died on the 19th September 1890. Let his friend, Ralph Richardson, who wrote D M-H’s obituary, have the last word: ‘He was one of the true aristocrats – not merely a possessor of position, wealth and lands, but of knowledge, public spirit, ability and intellect’.

He was also our longest serving EGS President.