Charles Thomas Clough (1852-1916) is an important Edinburgh geologist, whose name lives on in the current activities of EGS through the Clough Medal.  This is presented annually to a geologist whose original work has materially increased the knowledge of the geology of Scotland and/or the north of England, or who is Scottish by birth or by adoption and residence and has significantly advanced the knowledge of any aspect of geology.

In 1875, he joined the Geological Survey of England, and in 1884 was transferred to Scotland. He was promoted District Geologist in 1902, and served as such until his death in 1916. In the Transactions of the Edinburgh Geological Society, v. 11 p.236-238, 1923, his obituary was compiled by Edward Bailie. Bailie wrote “His work, both with hammer and pen, was strongly characterised. He was a man of small stature, and could only travel at a moderate pace. His plan was to go slowly, and collect his information fully, with a view to subsequent selection of the more essential elements. In addition to his detailed mapping, which for accuracy and completeness stands unrivalled, Clough’s geological achievements in Scotland are many and important. They may conveniently be summarised under the headings of various districts in which he worked.

The various districts include;

(1) Comal – he originated the theory of re-folded recumbent folds, which some of us think explains much that is otherwise inexplicable in the Highland schists.

(2) North-West Highlands – he came t o the conclusion that the sedimentary schists of the Lewisian Complex, as exposed at Loch Maree and Glenelg, post-date their igneous associates.

(3) East Highlands – he played an important part in the investigation of the aureole of contact-altered undistorted sediment which surrounds the augen-gneiss of Inchbae.

(4) Mull – he demonstrated the complex time-relations of the cone-sheets to the Ben Buie and Corra-bheinn Gabbros.

(5) Lowlands. He disproved the supposed unconformity at the base of the Barren  Red Coal Measures of Ayrshire.”

Charles Clough was born on 23rd December 1852 in Huddersfield, where his father, Thomas William Clough (1817-1872) was a junior solicitor and town clerk (chief executive), born in Pontefract in 1817, son of William Clough and his wife Mary. His mother was Amelia Jane Ibeson (1821-1894), daughter of James Ibeson, surgeon in Hemsworth, and his wife Jane. Charles was the fifth child in his family, with four brothers, the youngest of whom died in very early infancy, and two sisters. We know nothing of his family life, except that his father was wealthy enough to send his third son Charles to Rugby School (1867-1871). From there he went to St. John’s College, Cambridge where, according to his close friend Edward Greenly (1938) he was ‘intended for the church’, but for some reason instead he turned to geology. Maybe his professor influenced him. Maybe Huddersfield’s Coal Measures, with their coal and iron mines and sandstone and shale quarries, aroused his youthful curiosity. He was awarded an exhibition in natural sciences from 1872-1874, and graduated with a first in the Natural History in 1874, gaining his MA in 1878.

Based on an article in Vol 28 of The Edinburgh Geologist  (Autumn/Winter 1995). Further details on Clough’s life and works can be found at the BGS website – Pioneers of Geology. 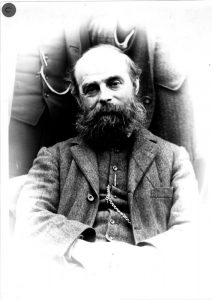 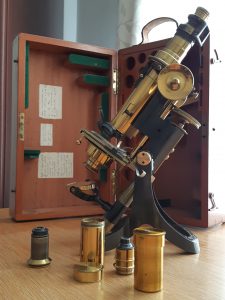 This microscope was given to former EGS member, Sinclair Ross (now deceased), in 1975 by the ecologist, naturalist, farmer and author, Sir Frank Fraser Darling. In a covering letter, Fraser Darling said that the microscope had been given to him forty years before by Clough’s daughter. The small pieces of paper stuck inside the lid of the microscope’s carrying case are in Clough’s own handwriting and are notes to himself concerning the magnification obtained with the different objective lenses.

Further information provided by Sinclair identifies the microscope as a Swift Dick model of about 1890. In contrast with modern microscopes the barrel, cross-hairs, polariser and crossed nicols all rotate, with the slide itself staying still.