On January 14, 1890, British geologist Arthur Holmes was born. Holmes pioneered the use of radiometric dating of minerals and was the first earth scientist to grasp the mechanical and thermal implications of mantle convection, which led eventually to the acceptance of plate tectonics.  In 1943, he was appointed to the position of Regius Chair of Geology at the University of Edinburgh, a position which he held until his retirement in 1956. During this time, he published his “Principles of Physical Geology”, a key reference for geology courses for many decades thereafter.  He also held the position of Vice President of our society in the years 1948-49. 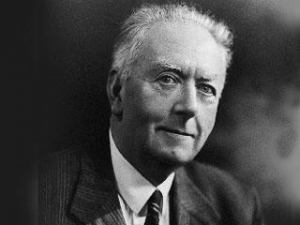 Photo courtesy of University of Edinburgh, Department of Geology and Geophysics

It was as an undergraduate at Imperial College London that Holmes first became interested in the phenomenon of radioactivity, which was a new and exciting field in science at the time (see Family and education below). During his final year as a student, in 1910, he pioneered the use of radiometric dating, a technique that can be used to date rocks and minerals. It was this method which allowed scientists to discover the age of specimens which are many millions of years old, and eventually to attempt to discover the age of the Earth itself. Initially Holmes was reluctant to comment on this topic, but by 1913 he had published results in a book entitled “The Age of the Earth” indicating that some of the oldest rocks identified were 1.6 billion years old. Years of method improvement and re-testing followed and in 1946 several different groups of scientists came to agreement – the Earth was in the region of 4.5 billion years old.  His promotion of radiometric dating theory over the next decades he earned the nickname of “Father of modern geochronology”.

Holmes was also able to use his understanding of radioactivity and apply it to other long-standing geological problems, including suggesting that currents caused by radioactive heat were the driving force behind plate tectonics. The Theory of Continental Drift as proposed by Wagener (and for which Holmes was a passionate advocate) was unfashionable among scientists, because it lacked a driving force to create movement of the Earth’s crust. Holmes suggested, in 1930, that the circulation of heat within the Earth could push large areas of the crust together, forming mountains such as the Himalayas, or away from each other, producing oceans such as the Atlantic. It was not until 1960’s that other scientists were able to find physical evidence for the movement of the continents when sea-floor mapping revealed submarine plateaus and trenches, where tectonic plates were being pulled apart or forced underneath each other.

Arthur Holmes was born in Hepburn, near Newcastle-upon-Tyne, the son of David Holmes, a cabinet-maker, and his wife, Emily Dickinson. He attended the Gateshead Higher Grade School.  One of his teachers, Mr. McIntosh, introduced him to the Popular Lectures and Addresses of Lord Kelvin, as well as the work of the Swiss geologist Edward Suess. Holmes was later to remark that the inspirational Mr. McIntosh, and these two works, were largely responsible for the direction his life took.  He enrolled to study physics at the Royal College of Science (now Imperial College London), but took a course in geology in his second year which settled his future. Then after graduation in 1910, he took a job prospecting for minerals in Mozambique but caught malaria and which force him to return to the UK, where he took up a demonstrator’s role at Imperial College in 1912.

In 1917, at the age of 27 he received his PhD from Imperial College London. In 1920, Holmes joined an oil company in Burma as chief geologist. Personal tragedy was to strike whilst abroad with the death from dysentery of his three year old son, from his first wife who he married in 1914 and who died in 1938. In 1924, the oil company failed and he returned to England penniless, but he was then appointed to the newly created post of reader in geology at Durham University, where he stayed for nine years and married his second wife Doris Reynolds in 1939. She was also a geologist and the first female Fellow of Royal Society of Edinburgh (b. 1899 and d. 1985). His time spent in Durham is marked by University’s Earth Science Department naming its Isotope Geology Laboratory after him, as is the students’ Geology Society.

In 1942 his achievements were recognised, when he became a Fellow of the Royal Society.  His position as Regius Chair of Geology at Edinburgh University was marked in 2015 with an exhibition entitled “Arthur Holmes: The most famous British geologist you have never heard of” at the University Main Library.  Thankfully though, his expertise was recognised by many international geological surveys and societies including; the Murchison Medal (1940) and Wollaston Medal (1956) awarded by the Geological Society of London; the Penrose Medal (1956) awarded by the Geological Society of America; and the highly prestigious Vetlesen Prize (1964).

The #GeoWeek 2021 website is now live at our new home with University Geoscience UK @UGUK_EarthSci - time to start planning events for 1-9 May!
https://earth-science.org.uk/geoweek/

So, who is excited about the #Edinburgh #UrbanNatureMaps? We are - EGS is delighted to have supported this initiative, and contributed a geological perspective to a unique resource that celebrates the best of our wonderful city.
https://www.urbangood.org/blogs/urban-good-news/urban-nature-maps-for-edinburgh-and-glasgow