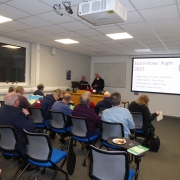 On 14th December 2022, the Edinburgh Geological Society held its 189th Fellows’ Night at the Grant Institute, University of Edinburgh. This meeting takes place each year, close to the anniversary of the foundation of the Society (on 6th December). 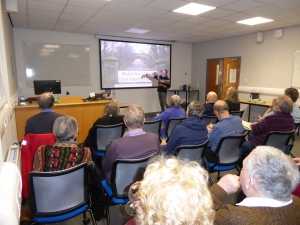 The pandemic has meant that a “normal” Fellows’ Night has not taken place for a few years now.

This year we were determined to be “normal” again and so an in-person event was held at which a series of short talks were given by members and some refreshments enjoyed by all.
Four speakers were lined up for this event, but first Mike Browne (acting EGS President) gave a thank you to both Alison and Barry Tymon for their contribution to geoconservation in the Midlothian and Scottish Borders recently, and in Yorkshire previously. This work has added significantly to the total of number of local sites recognised for their geological interest across the Lothian and Borders region to 166.

The talks kicked off with Angus Millar (EGS Promotion Coordinator) (and his dog) taking up a challenge to visit 30 geoconservation sites in the month of November, and yes, he achieved this – 32 in fact and despite wet weather. Sites visited varied from Kilspindie beach erratics to the Eildon Hills, and Carlops glacial drainage channels to River Clyde oxbow lochs and active meanders. A fascinating demonstration of the breadth of geological sites on our doorsteps.

Second up was Bob Gatliff who updated Fellows on Siccar Point activities in 2022 – the embarking on the process of getting UNESCO heritage status for Hutton’s Unconformity, obtaining widespread support for the project and recognition by IUGS of Siccar Point being one of the first one hundred sites recognised for its geological heritage significance.

Thirdly, Mark Williamson (University of Edinburgh) described his geological reconnaissance of the Bilston Glen SSSI as a location for future undergraduate student visits. Its combination of mining heritage and exposures of the Lower Carboniferous (not always so clear) was described.

Finally, we heard from Prof James Floyd on his “Ships of stones” which described some fascinating collections of ornamental decoration using geologies from around the world. He explained how he discovered these treasures when engaged to give lectures on cruise ships. This had led to the discovery that not only was the best geology to be found at the islands they visited but that on board many of the ships was a wealth of geological interest as well (sadly not being recognised by many of the crew members and passengers).

In conclusion, I think everyone who attended came away with the feeling that geology surrounds us everywhere and that although not everywhere has that notice board just yet, there are a huge number of resources available through the EGS website (the Autumn Members’ Challenge is a good place to start).

We look forward to many more Fellows’ Nights in the future. 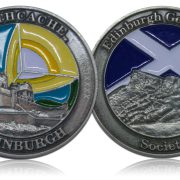 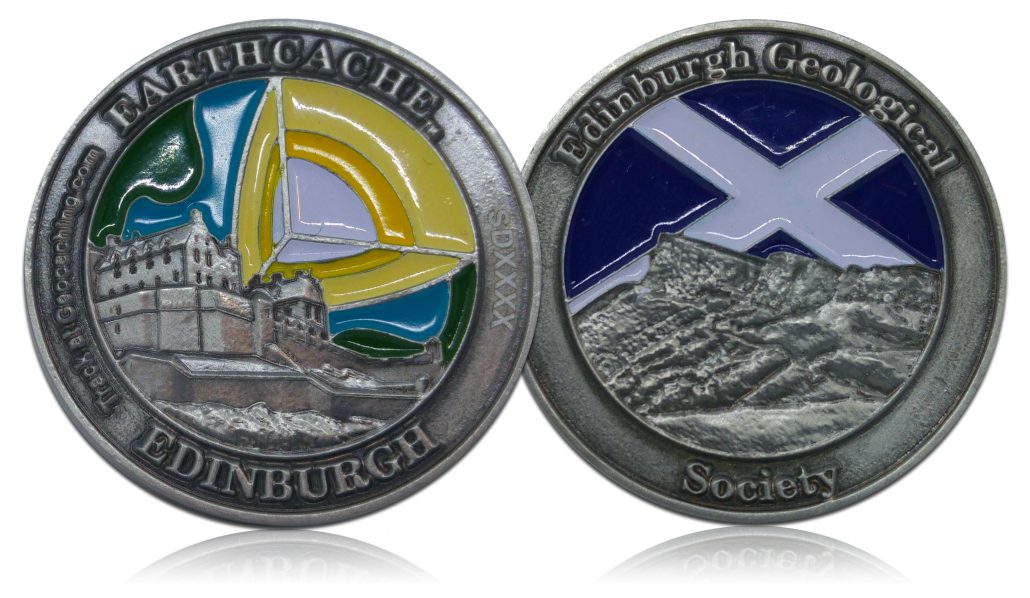 To celebrate the rich variety of Edinburgh’s geology and the number of Earthcaches in the area, the Edinburgh Geological Society has produced a souvenir Edinburgh Earthcache Geocoin. This is an attractive trackable silver coin with views of Edinburgh Castle and Salisbury Crags. Find out more about Earthcaches and purchase the souvenir coin here.