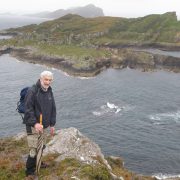 Tony Spencer on The Garvellachs

On 17th February 2021 our annual Clough Medal lecture took place for the first time as totally virtual event. The medallist for 2020-21 was Dr Anthony M Spencer who gave a lecture entitled the “The Port Askaig Formation in Argyll: uncovering the evidence for repeated climatic change in a Crogenian glacial sequence”. He was presented with his medal (again virtually) by our Vice-President, Prof Emrys Phillips on behalf of the Edinburgh Geological Society.

A brief outline of Tony’s career was described by David Stephenson. Tony had first come across the Garvellach Islands during his Doctoral research at Liverpool University in 1963. He had been presented with the topic his supervisor, Prof Wally Pitcher, who with Prof Robert Shackelton had visited the islands in 1961. Tony completed his PhD in three years and then moved onto a Post-Doctoral research position. Their findings were noticed by the Geological Society of London and led to approval for a Special Publication “Late Pre-Cambrian Glaciation in Scotland” which was published in 1971.

Tony’s career turned in a different direction after this, to more off-shore geology with stints with both BP and Statoil, and in various parts of the globe. He retired in 2012, after which he turned his attentions back to the Garvellach Islands. He then explained how through collaboration with experts in a range of specialisms, they had been able to uncover together so much more, to build on what hade been done before.

The Garvellach Islands lie in the Forth of Lorne, off the west coast of Argyll. There are four main islands and many skerries around them. The islands expose around 550m of the Port Askaig Tillite Formation, around half of its total thickness. Contained with these exposed rocks are 47 diamictites (poorly sorted or non-sorted terrigenous non-calcareous sedimentary rocks). The sequence shows many examples of where grounded ice has scraped at the sediments when these were exposed on land, some marine drop-stones indicate the presence of intruding seas at other times and also periglacial features such a frost polygons and frost shattering of exposed surfaces. In total, they have identified 28 glacial periods, 25 inter-glacial periods and 23 periglacial periods, a total of 76 significant climatic episodes in this one sequence. 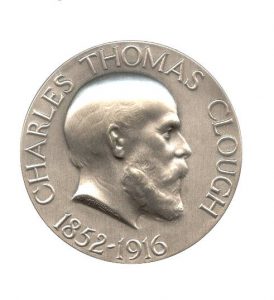 We learnt from Tony about how many days had been spent by numerous geoscientists on the islands over the past eight years to gather this data. He also mentioned all the boat trips made to and from the islands by virtue of three generations of the MacLachlan family of Luing.
Finally, Tony touched on the Garvellach’s history of human occupation from AD 542 (1st Century) by monks from Ireland (?) through to just before the 2nd World War when the last residents on island left. Now only migratory geoscientists visit there, many of whom are longing to return for the delayed field season of 2020 (their 9th year!).

The audience for Tony’s talk was spread widely around the globe from the USA to Australia, via Stavanger in Norway where he was presented his lecture for this evening. The vote of thanks was given by Prof Tony Prave (University of St Andrews) who thanked him for a truly unique Clough Medal lecture delivered by virtual means. He also thanked Tony for the time he takes to support a wide range of students and his openness in sharing of ideas, and for explaining his material in such a compelling way.

Anyone who wasn’t able to attend, or would just like to listen again to Tony’s lecture, can find the recording on our YouTube channel, which can be accessed from the Lectures page. 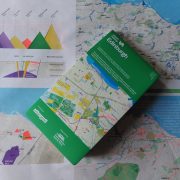 The Edinburgh Geological Society is delighted to have supported the production of a new map for Edinburgh, the Urban Nature map, and contributed a geological perspective to a unique resource that celebrates the best of our wonderful city. You can read more about the map here – www.urbangood.org/blogs/urban-good-news/urban-nature-maps-for-edinburgh-and-glasgow, and this page also includes links to buy the new Edinburgh and Glasgow maps.

Do check out the amazing atlas on the reverse of the map, including some geological info below, and lots of useful and interesting maps, diagrams and data to encourage people to think and explore.

This panel and much more is available at https://www.urbangood.org/pages/edinburgh-urban-nature-map-resource 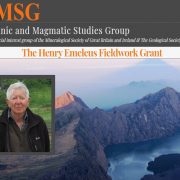 In 2018, the Volcanic and Magmatic Studies Group established a new award, named after C. Henry Emeleus (1930–2017), the internationally renowned igneous petrologist and field geologist (and esteemed member of the Edinburgh Geological Society!). This single award of up to £1000 for fieldwork honours the pioneering work that Henry Emeleus undertook in the Paleogene North Atlantic Igneous Province (primarily Greenland, Ireland and NW Scotland). His highly-respected studies spanned over 60 years and were all underpinned by meticulous field observations.

To be eligible for the award applicants must be UK based, and either:
• registered postgraduate students;
• postdoctoral researchers; or
• university lecturers.

At least 50% of the award should be spent directly on research fieldwork (transport, accommodation and field logistical support). 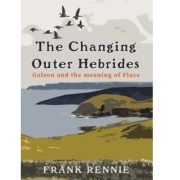 Members and friends of the Edinburgh Geological Society might be interested in a new book, written by Frank Rennie, about sense of place in the Outer Hebrides. Frank is a member of EGS and has previously lectured to us. He is Professor of Sustainable Rural Development, Assistant Principal (Research, Enterprise, and Development) at the University of The Highlands and Islands.

The Changing Outer Hebrides – Galson and the meaning of Place is a fascinating and intimate account of the inter-relationship between one small island village in the Hebrides and the wider world. From the formation of the bedrock 3 billion years ago, to the predictable near-future, the layers of this unique landscape are explored. The social history of the people is closely interwoven with the natural environment in a journey of deep mapping to consider the meaning of special places. Through the Iron Age and the Clearances to the contemporary events of community land ownership, a portrayal is given that challenges the perception that this is a remote place, isolated at the edge, but instead is crucial to our contemporary relationship with the land.