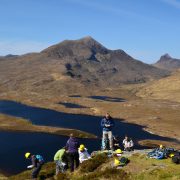 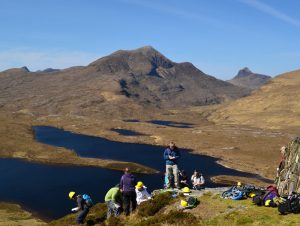 The recent news from the Highlands of Scotland about extra visitors during the Coronavirus pandemic got me thinking about how we can enjoy Scotland’s Geoparks from a distance.  Turning to the websites for the North West Highlands Geopark, Lochaber Geopark and Arran Geopark, I have been able to find lots of interesting information to keep you informed about these organisations, as well as filling a spare hour or two whilst we are all at home.

We set this quiz before Easter, and the answers are now given below; thanks to everyone who took part!

Q1 – What is the name of visitor centre in the North West Highlands Geopark?
The Rock Stop

Q2 – Approximately how many hut circles are recorded in the North West Highlands region?
30

Q3 – In what geological formation is the King’s Cave on the western side of Arran?
New Red Sandstone

Q4 – What is the approximate age of the granite intrusion that forms the northern part of Arran?
60 million years

Q5 – How many interpretation boards has the Lochaber Geopark installed in its area?
20

Q6 – What is the type of volcano found in Glen Coe and which is thought to be first ancient one recognised anywhere in the world?
Caldera

Q7 – In what year did James Hutton visit Lochranza, in NW Arran to observe the geology?
1787

Q8 – What is the name of famous dyke sequence found near Laxford Bridge, in the the North West Highlands Geopark?
Scourie Dykes

Q9 – What is the approximate distance in km by which the Great Glen Fault is thought to have slid horizontally?
100km

Q10 – What is name of the giant millipede that roamed Arran 300 million years ago?
Arthropleura

Q11 – What is the name of famous lighthouse in the far west of the Lochaber Geopark?
Ardnamurchan

Q12 – What was the approximate age at which the last glaciation ended in the NW Highlands?
11,500 years ago

Q13 – What is the name of the mountain range in which Ben Nevis lies, within the Lochaber Geopark?
Mamores

Q14 – Where is the interpretation centre for Arran’s geology to be found?
Lochranza

Q15 – What is the approximate age of the Lewisian Gneiss rock found in the NWH Geopark?
3000 million years

Hopefully you found all the answers!

Great to see Councillor Gavin Corbett visiting a Local Geodiversity Site - "places where the variety of geology of the local area can be enjoyed and appreciated". There are 30 across the city. Bet nobody's been to all of them! @Edinburgh_CC https://t.co/GT8NXR2l5H

The Ask-A-Geologist @GeoWeekUK events have been great. And there two more coming up ...
Friday 4pm with Simon Cuthbert
Sunday 4pm with Mark Wilkinson
... they've got pretty much every aspect of Scottish geology covered between them!
Join us https://t.co/bvdKpJ6kmQ

Reply on TwitterRetweet on Twitter3Like on Twitter1Twitter
Load More...